WHAT IS BLOOD FLOW RESTRICTION?

Blood flow restriction, also known as BFR, involves wrapping a device such as a pressure cuff, occlusion training bands, or even knee wraps around the top portion of a limb to restrict blood flow out of the working muscle. During properly performed BFR, blood is able to enter the muscle via arterial flow; however, the veins are restricted so that blood is partially prevented from leaving the working muscle.

This arrangement allows for a swelling effect of the muscle, which is the first mechanism of muscle growth. Blood flow restriction also causes a buildup of metabolites, such as lactic acid, that have been shown to directly stimulate muscle growth. And the direct fatigue caused to the muscle forces the nervous system to recruit the largest fast-twitch muscle fibers, which have the greatest capacity to grow.

IS A WARM-UP OR COOL-DOWN NECESSARY?

In general, blood flow restriction is performed at intensities normally used for a warm-up set, such as 30-50 percent of your one-rep max (1RM). As such, I would recommend a light, general warm-up of around five minutes, such as walking or light cycling, followed by 15 unwrapped repetitions with the weight you will use for your first set of BFR.

WHAT SHOULD I USE TO WRAP, AND HOW TIGHTLY SHOULD I WRAP?

Traditionally, BFR involves the use of a specialized inflatable cuff, known as a occlusion bands, to restrict venous blood flow. The advantage to such devices is that you can precisely control the pressure and always replicate it on workouts.

Unfortunately, most individuals do not have access to this sophisticated device, which has led our lab to complete extensive research on what is known as practical blood flow restriction (BFR). Practical BFR involves the use of an elastic wrap to restrict blood flow. In studies, we have used knee and elbow wraps. However, cotton elastic bandages can also be used. 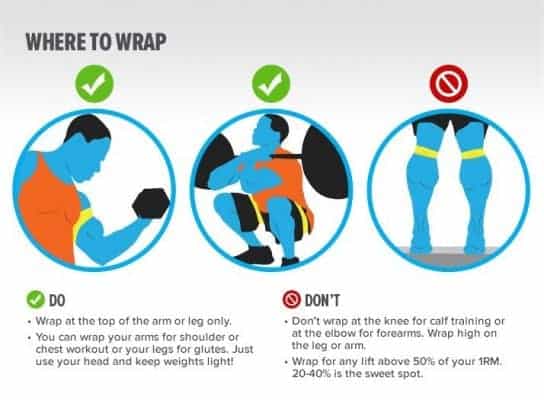 While practical, one concern is that you may restrict both the arteries and veins. Arteries bring blood to the muscle, while veins take blood away. To get the maximal swelling response, you want blood coming to the muscle and staying there. Thus, we want to restrict blood flow to the veins without occluding the arteries. This is important to understand because all of the potential negatives resulting from BFR stem from fully occluding both the veins and arteries. In fact, there is evidence that wrapping tight enough to cause arterial occlusion may actually decrease muscle growth at the site wrapped.

However, it is important to note that at a perceived pressure of 10 out of 10, both venous and arterial blood flow were totally restricted! 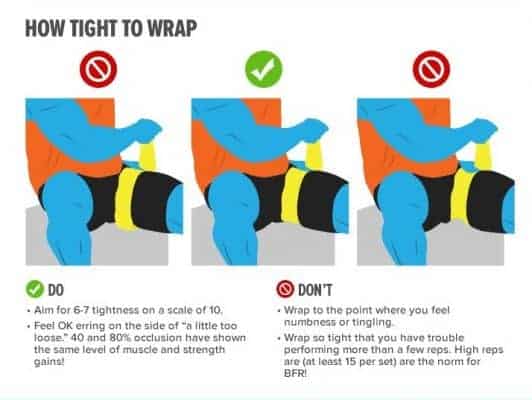 Research has shown that a narrower cuff width (5-9 cm) reduces the risk of occluding the arteries, compared to a wider cuff or wrap (13+ cm). For this reason, I also recommend wrapping at the top of the legs or arms in a layered manner rather than wrapping in a spiral manner all the way down the arm or leg.

The size of your arms or legs will also determine how tightly you should wrap. Research shows that smaller limbs have a greater probability of being arterially occluded. For most people, I recommend wrapping at a 7 out of 10 on the legs and a 6 out of 10 on the arms. 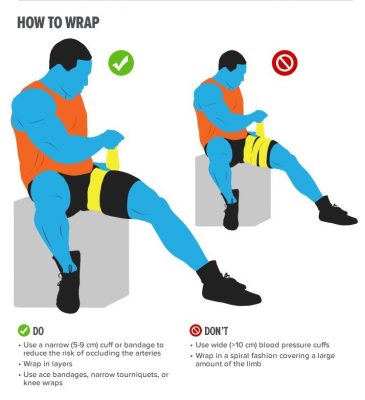 HOW HEAVY SHOULD I LIFT WITH Blood Flow Restriction?

So how heavy should you lift? Research has shown gains with as little as 20 percent of your 1RM. However, muscle growth in this case is primarily caused in the slow-twitch, not fast-twitch, fibers. One study compared moderate-pressure BFR with 20, 30, and 40 percent of subjects’ 1RM. They found that fast-twitch muscle fibers were not maximally recruited until 40 percent. However, other research has shown that lifting at 80 percent 1RM compared to 40 percent does not increase muscle fiber recruitment. In addition, there is less metabolic stress.

Taking all this into account, BFR for maximal muscle growth should likely be performed at approximately 40 and no more than 50 percent of 1RM. However, if you are using BFR as a recovery day, then performing resistance training at 20-30 percent of 1RM will likely still result in benefits in the slow-twitch fibers. This could be important, as these fibers are often difficult to hypertrophy.

IS BLOOD FLOW RESTRICTION SAFE FOR MY NERVOUS SYSTEM?

This is a common question. In a survey published in Metabolism, a small percentage of BFR training sessions led to numbness in the wrapped limb. This leads to the implication that BFR could be too taxing on the nervous system; however, further studies looking at nerve conduction velocity (speed at which a nerve impulse is transmitted) saw no change following four weeks of BFR at 30 percent of 1RM.

To us, this indicates that several of the BFR training sessions that led to numbness could have been a result of improper wrapping techniques. Learn to do it right, and you should have nothing to fear. 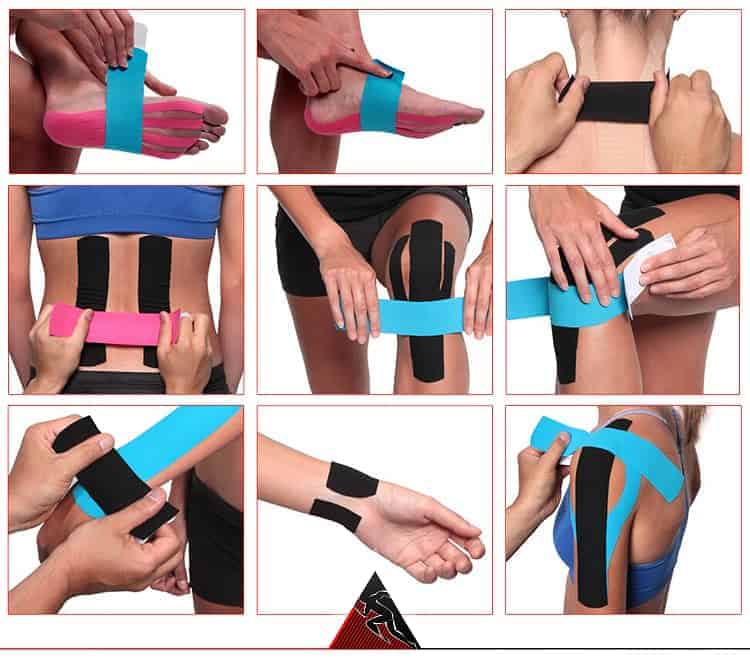 How to use ​kinesiology ​ tape

​Get our step-by-step Kinesiology Taping Instructions for F​REE​

It's easy to tape yourself! Get access to our full kinesiology tape instructions. Step-by-step guidance kinesiology taping for knees, elbows, shoulders, ankles, shins, wrists, hamstrings, back, neck, arms and much more.

​BONUS: in addition, you'll receive Free access to StarkTape VIP Member Club, to stay on top of the latest news and products